After months of teasing, Amazon will reportedly ‘greatly expand’ its online offer in Australia over the next year. The move has been predicted to ‘decimate retailing as we know it’, but the sky will not fall in. Our shopping centres won’t close and retail will survive. 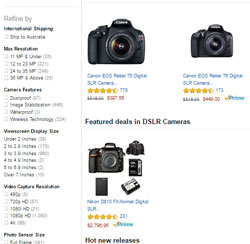 Amazon has not committed to opening physical stores in Australia, and it recently announced a temporary hold to the rollout of its Amazon Go convenience stores. With no physical stores, Australia represents a very small market for the retail giant.

Shoppers in Australia spent just $21.65 billion online in 2016. While that may seem significant, it only represents 7.1 percent of what was spent in ‘bricks and mortar’ shops. And as a result of a weak Australian dollar, 80 percent of the money spent online last year was with Australian retailers and online shops.

But ecommerce is also not the juggernaut it was. Globally, growth of online shopping has slowed as department stores, supermarkets and other retailers saturate this channel. Even in markets where Amazon features services like Amazon Fresh (groceries), Amazon Prime (free shipping and streaming) and Prime Now (express delivery), sales growth has slowed.

The challenges
There are also other challenges for Amazon trying to conquer the Australian market. Consumer habits, perceptions of risk, market size and distribution among them.

Many consumers still avoid online shopping, concerned about credit card fraud, quality and returns policies. Not being able to touch and try on before purchasing presents a real barrier to ecommerce, as do long delivery times, delivery fees and currency fluctuations.

As far as online grocery shopping is concerned, research has shown that only 3% of consumers shop online for their food and groceries. And this market is already well serviced by a wide variety of players, from Coles and Woolworths through to pure-play online grocers like Aussie Farmers Direct, Grocery Run and Kogan Pantry. Amazon will need to come to this market with a significant offer to convince this small group of incumbent shoppers to switch.

The online purchase of clothing, footwear and accessories has increased substantially in the Australian market, representing 16 percent of sales in physical stores. These sales have been driven through establish brands, discount department stores, global entrants and pure-play retailers like Net-a-Porter, Shoes of Prey and The Iconic. But many of these businesses may also choose to sell their wares through the Amazon ‘marketplace’, which would mean no significant loss of sales to brands, but simply a switch between channels.

Amazon competes not just on price and product range but also free or speedy delivery. While Amazon Prime and Amazon Prime Now might work well in the US or UK, due to the large and concentrated populations in some areas, it will be more challenging in Australia. Less than half of us live in the three major capital cities and even these areas may not be economical to service in this fashion. Just look at the restricted delivery areas of the ecommerce sites already established.

Retailers need to adapt
Consumer electronics and toy retailers may be the most exposed to Amazon’s arrival. When you are shopping for toys it matters little whether you are buying through Amazon or Big W, it simply comes down to price. With its economies of scale, Amazon will win on price. Similarly, consumer electronics. A digital camera is a digital camera, whether it’s purchased through Harvey Norman or Amazon.

But as it stands, Amazon still appears a way off. Operationally, there is little indication of Amazon setting up warehouses and other infrastructure, or recruiting pickers and drivers needed for such a large operation. Although all of this is set to happen, we are told, in the next few months.

We need to see more technology like iBeacon, which allows physical retailers to use customers’ phones to deliver customised experiences. This has already been trialled at a shopping centre in Sydney. And as Amazon will provide a platform for brands to sell direct to the market, the brands we trust will become more important. So smart pure-play retailers, like Kogan and Catch of the Day have moved quickly to buy brands like Pumpkin Patch and Dick Smith. In doing so, locking these well known brands away.
– Gary Mortimer
Associate Professor, Queensland University of Technology
(This article was originally published in The Conversation)

COMMENT: The observation that ‘A digital camera is a digital camera, whether it’s purchased through Harvey Norman or Amazon’ along with the general approach of this article betrays a Big Retail orientation in the author’s thinking. Yet most Australian retailers are still specialists. We have re-published the article because it is a refreshing change from the ‘we’ll all be rooned’ tone of most coverage of the looming Amazon invasion (and there are plenty of useful links). But it is surprising that Associate Professor Mortimer has not mentioned some other basics which will enable specialist retailers in particular to compete against Amazon, just as they have been competing against Harvey Norman and the like. You know, little things like: customers service; product knowledge; expertise; trust; selling skills; a broad range; giving a damn. A digital camera is indeed a digital camera whether purchased through Harvey Norman or Amazon. But if it’s purchased through, say, Michaels, the buyer is far more likely to purchase the digital camera – plus vital accessories – which answers their needs! Surely that counts for more than iBeacon. (Whatever that is!)