Polaroid has entered the 3D doodling market by launching a crowdfunding campaign for its Design 3D Pen, an advanced drawing pen for artists, designers, engineers and other professionals.

The 3D pen industry is growing, says Polaroid, and the tool is becoming an integral part of how 3D models can be created without a 3D printer.

Polaroid Design 3D Pen was constructed by designers, architects, engineers and other technicians who want better 3D pens – and want them now!

But what the heck is a 3D pen? Good question!

Google returns results showing it as a toy for ages 12 and under.

But it’s also a tool for professionals who want to draw with plastic. It works the same way as a 3D printer. 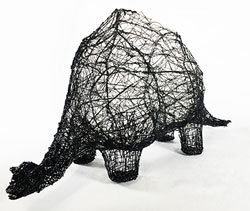 A ‘filament’ is inserted and heated through the pen. As it comes out, it becomes soft and pliable, and can be sculpted into any desired shape. It then hardens, allowing a user to create shapes.

This is Polaroid’s most advanced 3D printing pen. (Another pen, the Draw 3D pen for consumer use, was shown at CES in January with some fanfare)

It has an internal anti-jamming cooling fan, an auto shut-off feature which ejects the filament after use, variable speeds for the filament to eject, temperature control, an OLED LCD screen, and an ergonomic design which comes in four colours.

‘We were excited by the reactions we received at CES for the Polaroid Draw 3D pen. Giving everyday consumers the tools they need to share their creativity has always been at the center of the Polaroid brand,’ said Scott Hardy, president and CEO of Polaroid. ‘Because of the positive reception the Polaroid Draw 3D pen received, we decided to take a look at other segments of the market that were in need of quality 3D products at the right price point. We then recognised a need for an advanced 3D pen model geared toward design and engineering professionals. Whether they’re looking to create artwork, prototypes, jewellery or models, the Polaroid Design 3D pen will help these professionals bring their concepts to life.’

The campaign already has 12 backers, raising US$1735. So there is certainly some interest in this 3D pen.

While Polaroid is best known for instant camera, it appears it’s testing the waters in new markets. The campaign will allow Polaroid, through authorised licensee Coretech, to find if there’s demand for such a product.

The campaign is only into its second day, launching May 11.