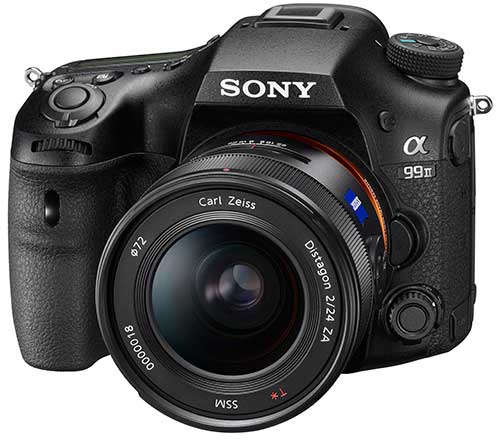 Sony claims the sensor’s ‘gapless-on-chip’ design allows for fast readout of large volumes of data as well and superior light gathering. It doesn’t have an optical low-pass filter, for fine detail and textures. RAW shooting can be in compressed or uncompressed modes.

Continuous live-view shooting is at up to 8 fps with AF/AE tracking with minimal display lag – Sony says it’s essentially no different to an optical viewfinder. Exposure, white balance and other camera settings are displayed in real time in the viewfinder and continuous live view shooting can be set in three stages to match a variety of subjects: 8 fps, 6 fps and 4 fps. ISO sensitivity range is 100-25,600, with expansions to ISO 50 and ISO 102,400 available.

The newly designed shutter unit is rated for 300,000 cycles, and continuous shooting is at up to 12 fps with AF/AE tracking (full res). A large buffer and sophisticated data processing enable bursts to be viewed immediately after shooting. Flicker detection is available for use when shooting under artificial lighting, and the shutter is timed to minimise its effect on the end image.

The in-body 5-axis image stabilisation system has been redesigned for A-mount cameras. In addition to movement in the pitch and yaw axes that tend to occur at longer focal lengths, this system effectively detects and compensates for shift blur that can occur on the X and Y axes when shooting close-ups, and roll blur that is often apparent in still images and movies that are shot at night.

New precision gyro sensors can precisely detect tiny camera movements that can cause blurring, providing a 4.5 step shutter speed advantage. The effect of image stabilisation can be monitored in the viewfinder or on the LCD screen during live view when the shutter button is half pressed or the Focus Magnifier functions are used.

The new ɑ99 II will start shipping in November. No local pricing supplied, but the US body only recommended price is US$3200 – which would push the price to over $4500 incl GST in Australia.