Olympus has announced the Olympus OM-D E-M5 Mark II, a replacement for the popular E-M5, with a range of innovations, enhancements and tweaks to improve what was already one of the most highly-rated cameras in the market. Release is scheduled for late February/early March with a body-only RRP of $1299. 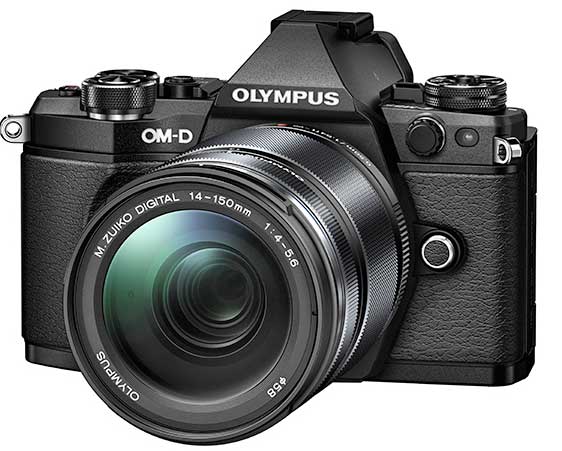 The new camera is slightly larger than its predecessor, and will be available in silver and black versions, with a robust metal alloy chassis and splash-proof, dust-proof, and low-temperature-resistant build. It uses the E-M5’s 16-megapixel Live MOS sensor, combined with the TruPic VII image processor in the E-M1. Image stabilisation has been further improved in the Mark II model. Olympus says it’s ‘the world’s most advanced 5-axis image stabilisation system’.

Up to five EV steps of shake compensation are claimed, along with a unique ‘Hi Res Shot’ mode: Eight full-resolution shots are captured in a sequence while the sensor moves by tiny, half-pixel steps. The eight shots are then combined into one super-high resolution image, equivalent to one JPEG image captured with a 40-megapixel image sensor. Resolution can reach 64-megapixels with raw file capture, which creates a 100MB file (compared with 20MB files for JPEGs). (Retailers should be able to bundle a few hi-capacity memory cards with a EM-5 Mark II sale!)

Hi-Res mode is essentially for static subjects and landscapes: It requires exposures of around one second with good light, and up to eight seconds in low light.

Video capabilities have also been improved to what Olympus refers to as ‘pro cinema’ quality. The E-M5 Mark II has the neat trick of producing stable images when the photographer is running and recording with the camera in hand. Pan-sequences are also smoother through combining hybrid-stabilisation with clever acceleration and deceleration algorithms. Video is at Full HD resolution, with a choice of 24, 25, 30, 50 and 60p frame rates. All-Intra and IPB recording modes can be selected with (approximate) maximum bitrates of 77Mbps and 52Mbps, respectively. Sound monitoring is also possible when the optional accessory grip is attached.

Art Filters are available when shooting video, and there are four different Art Effects. Movies shot as Clips via a new Clips function are automatically saved to the camera’s My Clips menu. Effects and background music can be added within the camera before exporting the entire sequence as a single movie.

Street photographers and wildlife photographers will like the ‘Silent’ shooting mode, which utilises an electronic shutter with a 1/16000 second top shutter speed. The mechanical shutter has a top speed of 1/8000 second, and Olympus says the time lag of 0.044 seconds is best in class. The E-M5 Mark II also offers an Anti-Shock mode (electronic first curtain shutter) that reduces shutter shock and is now compatible with sequential shooting.

The control layout has been tweaked slightly to position knobs, dials and buttons more ergonomically, enabling users to change exposure and other key camera settings while looking through the viewfinder. The new flip and swivel vari-angle LiveView LCD touch-screen has a resolution of 1.04 megapixels. The 2.36-megapixel Electronic View Finder (EVF) delivers 1.48x magnification and features ‘Adaptive Brightness Technology’, automatically adjusting the backlight brightness to suit the conditions. A new LV Boost II setting is provided for shooting star trails, while the Creative Control provides complete freedom of control over colour, tone, focus and aspect ratio in the EVF.

New accessories include the FL-LM3 tilt and swivel wireless flash, which is bundled with the camera. The ECG-2 metal external grip includes a quick-shoe rail for use with compatible tripods, while the HLD-8 dust and splash proof power battery holder is equipped with a headphone jack for monitoring movie recordings.

An EE-1 dot sight accessory is designed for super-telephoto shooting. It allows users to position a reticule onto the image and calibrate its brightness and position to suit the lens. The PT-EP13 Underwater Housing is designed specifically for the new camera and enables it to be used at depths up to 45 metres.

Other accessories include the EP-16 large eyecup and CS-46FBC leather cover and body jacket. The new camera uses the same BLN-1 battery as other cameras in the OM-D range. A ‘Quick Sleep’ power management mode enables battery life of up to 750 shots.