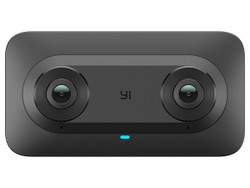 Yi has surfaced as an actioncam market disruptor. It manufactures budget action cams with competitive specs and high-end technology, such as Sony CMOS sensor chips, and has emerged as a serious threat to the stability of market leader and pioneer, GoPro.

Unlike many other Chinese equipment manufacturers, Yi hasn’t been tarred as simply a knock-off merchant. Forging a partnership with tech Leviathan Google to develop a new product shows the brand is attempting innovation in the somewhat stagnant actioncam market.

The Horizon Camera utilises Google’s VR180 format, which allows users to capture high-res video that is integrated for viewing through YouTube and Google Photos using popular headsets such as the Google Cardboard, DayDream, and PS VR. 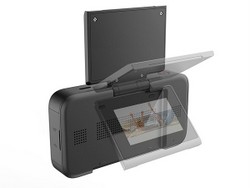 Instant in-device stitching and support for live streaming makes this camera ideal for video bloggers and other content creators.

The camera has a 2.2 inch retina touch screen, a pro-grade microphone with outdoor noise reduction, and a Type-C USB port.

‘We introduced VR180 as a way to make capturing high quality, immersive photos and video easy for consumers and professional creators,’ said Clay Bavor, vice president of VR at Google. ‘YI’s camera has amazing image quality, as well as features that we think will be compelling for creators, like livestreaming and a preview display. We’re excited to see what consumers and creators are able to capture and bring to virtual reality.’

Likewise Yi’s CEO, Sean Da, was excited by the partnership opportunity: ‘When the opportunity to work closely with Google’s VR team on this initiative presented itself, it was a no-brainer given the team’s extraordinary commitment to defining the future of VR experiences and extensive investment in the YouTube VR180 format,’ he said.