Epson in Europe has announced a new 6-ink printer, the Surelab D700, which forms the core of the Surelab D7 Studio, a microlab which can be run with a touch screen kiosk and linked to several printers. 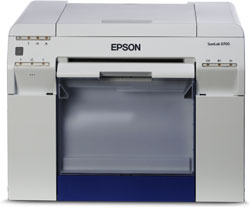 The new technology was debuted in the UK at The Photography Show (March 1 – 4) and scheduled for launch later this year.

The Surelab D700 has a maximum print width of 210mm and up to 1 metre in length, and uses a 6-colour Ultrachrome inkset. Cartridges are 200ml.

It can print photos, cards, etc, on a wide range of media and formats, including glossy, lustre and matte roll paper, from 4 inches up to A4 wide and from 3.5 to 39 inches long.

The Surelab D7 Studio can be used on the shop floor as a self-service order terminal or behind the counter.

It includes a 22-inch touch screen order terminal and can handle up to two printers (which can be housed in the kiosk’s plinth), with the provision to add more, all of which can run simultaineoulsy. It can send print jobs to the SureLab D700 and D3000, as well as Epson large format printers, to create posters and canvases. Its LED light panel can be tailored to match customers’ store colour themes and the screen can display digital advertising of the customers’ choice.

Epson Australia has informed Photo Counter that the new Surelab D700 and Surelab D7 Studio will be available in Australia later this year.