March 2, 2012: Canon marked its 75th anniversary last Friday with a gathering of major customers and media at Sydney’s Imax Theatre and the announcement of the latest model in the popular EOS 5D series, the EOS 5D Mark III. 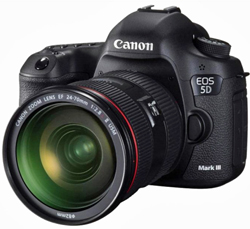 The new camera represents a complete redesign of its predecessor, the EOS 5D Mark II, and features many of the functions found in the (not-yet-released) EOS-1D X. The 5D Mark II will remain in Canon’s line-up at a reduced price, allowing the 5D Mark III to be positioned above it, in line with the large number of professional features it provides.

Photo Review Australia technical editor Margaret Brown was given a rare hands-on preview of the new camera and supplied with comprehensive information and illustrations of many of its features by staff at Canon Australia. This has resulted in a exhaustive and excellent, Australian-oriented ‘First Look’ at the new camera, which can be accessed here – congratulations to Photo Review and Canon.