Two IPIC 2015 conference attendees fresh back from Las Vegas share their impressions of the event. Thanks on behalf of the PhotoCounter readership to Jill Boswell, Snapshot, Hamilton, NZ, and Louise Miller, Griffith Camera House, Griffith, NSW.

Last week I attended the 2015 International Print & Imaging Conference (IPIC2015) in Las Vegas where the overall feeling is that there is a huge opportunity for those of us that think like the second salesman in the story above.

Great news – people don’t print photos anymore! With the right ’emotional marketing’ this is a great opportunity for us – just make sure you provide a great experience when they do walk in your door or order prints on-line.

The IPI conference is focused on printing and curating solutions and doesn’t cover camera hardware – at the trade show the only camera I saw was an Instax on Fujifilm’s stand, and Canon was there with some poster printers. Many attendees came from stores like ours that are predominantly hardware, but are now expanding their printing and educational services – some are even walking away from cameras.

A show of hands after one session also showed that Snapshot is not ‘bucking the trend’ by moving to a more suitable outlet – many stores are moving premises this year. IPI members are the survivors of the photo industry shake-up. I met one of the survivors as soon as I got off the plane at Las Vegas – the person seated next to me on a hotel shuttle full of IPI members tells me that being a member of IPI saved his business.

Attending IPIC 2015 in Las Vegas confirmed that we are on the right track – shoppers are craving a memorable experience and need a place where they can hang out, learn photo stuff and print their photos. Part of the experience is to provide classes and social events which we already do on a small scale, but I was pleased to hear that IPI is going to provide content for printing and mobile courses – something different from our traditional camera classes.

Lots of good sessions ran at the same time so hopefully I’ll be able to watch the sessions I missed when the recordings are made available to attendees.

It was great to mix with members from Australia and the Americans and to exchange ideas with each other. I particularly enjoyed the sessions where we talked to other members face-to-face or in small groups. There were other opportunities to socialise – we were guinea pigs for an event called ‘The Instawalk’ where we learned to embrace Instagram. We split into three groups and tried to outdo each other with crazy or creative photos.

Phones used to be the enemy of conferences and airlines but things have really changed. No one reminded us to turn our phones off before a speaker started and before the short haul flights between Auckland and Sydney we were invited to download an app to watch the inflight entertainment on our mobile devices – only ‘large electronic devices’ had to be stowed during take-off and landing.

The Instawalk taught me to become more comfortable with taking photos with my phone – my ‘real camera’ didn’t come out of my pack as often as my phone did. We’re looking forward to moving our new ‘mobile-friendly’ store and embracing mobile photography – IPIC showed us that the business opportunities surrounding mobile technology are limitless. 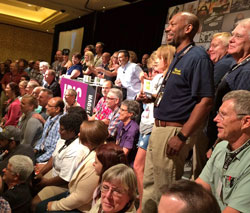 This was the second time I attended IPIC and have come away feeling re-energised and with a head full of ideas to bring to life, that will hopefully improve my services and offerings, that result in a better bottom line to my business.

IPI created an app for us to use while at the conference allowing us to navigate sessions, maps, speakers and a chat feature where we could meet up. There were a number of keynote speakers and we then chose to go to other smaller breakout sessions on topics that were interested in. Most of these sessions were recorded and will be available to members shortly from the IPI website.

IPI launched their Vison Project, which encompasses all aspects of a retail business. This is a work in progress and they are working on shop design, packaging, signage, POS and brand so that members can use this as a template to work within when re-modelling their store or starting from scratch.

There was an emphasis on EMOTIONAL MARKETING and EXPERIENTIAL RETAILING. We were shown a number of videos from businesses outside our industry that were using this emotional advertising and when making that emotional connection the sale of products becomes secondary. Here’s a TV Commercial from Whirlpool which illustrates the idea of emotional advertising.

Customer’s want a MEMORABLE EXPERIENCE. They will forget what you said, they will forget what you did, but they won’t forget how you made THEM FEEL. One of the companies that was highlighted regularly over the conference included Pirch. This company sells appliances but their marketing was not about selling an oven, it was about making a chocolate slice. One of the quotes used near a product was, ‘Never underestimate the healing power of a cupcake’ Our marketing should SPEAK TO THE HEART – MOVE THE MIND.

We got to experience an INSTAWALK the first night of the conference. We had three buses that competed against each other by learning to use Instagram and using different #hashtags (IPICGREEN, IPICBLUE, IPICRED) when uploading our images taken on the night. We were given some selfie sticks and taken down to the strip where we had two hours to have dinner and take images and movies. On the bus trip home we had to pick out the best one from each bus and the following day were shown the winning one.

There has been an update to the iPhonography courses that you can download from the IPI website and includes both Apple and Android courses. These will be available shortly.
We also got a glimpse into the forthcoming new Dakis Photobook module. It is expected to be available the third week of September. There will be an auto load feature, predesigned layouts for dropping images in, image correction and the same look and feel in-store as at home.

The trade show allowed us to see some new products like bamboo blocks, acrylics, metal and glass blocs that I’m sure will soon start filtering through from our local suppliers, if not already.

Overall I really enjoyed the conference and found many positive people and ideas – and it was sad to leave the sun behind.