The latest figures from CIPA show that the new mirrorless interchangeable format cameras have not made the impact that the camera makers may have hoped.

Commenting on the CIPA figures, photography blog 1000 Noisy Cameras notes that: ‘DSLRs are outproducing/outshipping Mirrorless cameras by a near 5-to-1 margin in the first quarter of 2012 for the whole world. The comparative numbers for production vs shipments are similar.’

In Europe there are 10 DSLRs shipped for every one mirrorless model, while the Japanese market is most suportive of mirrorless interchangeables, with the ratio closer to one mirrorless to 1.5 DSLRs.

This apparent worldwide buyer indifference may be causing some heartburn for camera makers planning the future product pipeline. New releases of DSLRs have virtually dried up in the past 12 months or so, with all the action in the enthusiast segment of the market focussed on mirrorless interchangeable models. This seems to imply an effort to migrate customers to this new format, which essentially offers DSLR-like quality in a smaller, lighter product.

– But what if the type of people who are interested in image quality, manual operation and advanced features aren’t necessarily demanding smaller, lighter cameras? Perhaps the attributes of bulk, weight and the ‘visual presence’ of a DSLR are actually features, rather than problems, in the minds of a good proportion of prospective high-end purchasers? Perhaps they like the ‘I’m a keen photographer’ statement a DSLR around the neck conveys? In this context it’s interesting to note that market leader Canon has been slow off the mark with a mirrorless interchangeable model.

Earlier in the year we asked Brendan Dowd, an analyst from market data specialist GfK Australia whether there had been any recent local growth in detachable lens cameras: ’The Compact System Cameras (mirrorless interchangeable) segment has been growing,’ he replied. ‘The sales in 2011 were double that of 2010 and they were worth 12 percent of all changeable lens cameras in 2011.’

That is, around one in 8 interchangeables sold in Australia last year was a compact mirrorless model. In December the figure rose to 13 percent.

We checked back with Mr Dowd this morning: For the year to March that December figure of 13 percent had risen to 15 percent. That’s just under seven DSLRs for every mirrorless interchangeable. 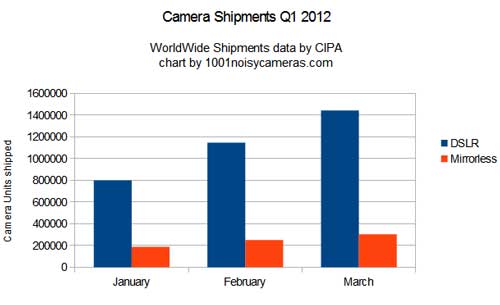